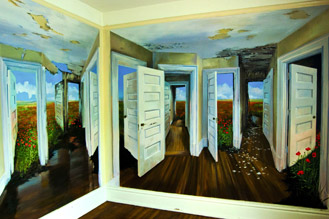 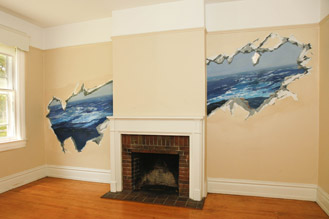 The work of Adam Cvijanovic is based in his interest in exposing the historical and enduring hubris of American culture. His contemporary landscapes paintings are a window into a monumental setting where history mixes with magic realism to let us see the memories of those who formerly lived in these spaces. As in Picardie, placed on the second floor in house 404B/D, the memory of a room takes on the architectural elements of the room itself. The memories of that room, lead yet through other doors, deep into the psyche and history through to yet another memory – a field in France.

Adam Cvijanovic visited Governors Island, he was intrigued by its scenery but more so with all the doors in the houses. The doors suggested portholes that open to a magical encounter with the world of dreams and closeted recollections. Cvijanovic’s starting points for this site specific work evoke the memories of officers who ran The American Expeditionary Forces and who were sent to Europe in World War I. Governors Island was the home for many of these officers since it served as a supply base and embarkation point for troops during the war. These doors brought to mind a landscape of northern France and vistas of endless poppy fields. Cvijanovic’s images are designed to be minimally invasive but evocative, kindling a sympathetic bond with those who lived within these walls and with their destinies.

The site-specific painting, Wave in the Wall, is a universe that floats between dream and reality in which the passage of time and destruction are the main characters of the story.  In the abandon spaces of the houses, library, churches, offices and theater, Cvijanovic suggests, the forces of nature have proved more durable than man’s need to contain and control. Using tromp l’oeil to create a hole in the wall through which we see a stormy sea, both pieces in the installation are pivoted on the idea of the picture plane in representational painting while at the boundary of the picture plane the works directly mimic the rooms in which they are located.

Wave in the Wall (2010) Flashe and house paint on Tyvek