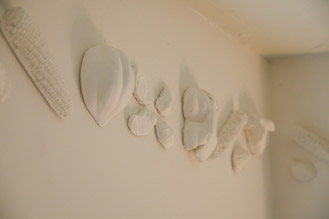 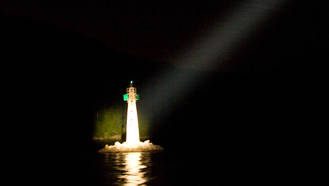 Alan Michelson’s interest in American landscape is based in his deep involvement with American history and pre-history, in the global drama generated by the spread of European colonies across a large continent already inhabited by Native people, plants, and animals. New York City-based for the past twenty-years, he has examined this legacy as it applies locally in a series of site-specific works in various media.

The site-specific wall installation in this room, Colony, obliquely encapsulates a history of colonial exploitation through its appropriation of an Old World form—the frieze—with an unexpected New World iconography of indigenous beaver skulls, corn, squash, oyster shells, and nuts.  All were originally grown or harvested locally, in fact, the original native name of Governor’s Island being Pagganck, (Nut Island) after the abundance of edible hickory nuts once found here. Some of the objects are pristine and whole, some eaten or crushed, pointing to the voraciousness and callousness of colonial ventures. That appetite and its legacy devoured not only indigenous food, land, and animals, but swallowed up streams and wetlands, poisoned the famous oyster beds in New York Bay, and removed all of the native tree species on Governor’s Island.

Shattemuc, created during last year’s Hudson River Quadracentennial, retraces a portion of Hudson’s original journey in which his crew had a bloody encounter with local natives. A video shot at night from a boat, the elegiac work depicts, in the projected beam of a marine search-light, passage upriver from Hook Mountain to Haverstraw Bay.
Besides alluding to the mechanism of psychological projection, the searchlight projection references Hudson River Night Line boats, which shone spotlights onto shoreline monuments for touring passengers. Embedded also are allusions to the Hudson River School painting style.

The course of the night boat in Shattemuc — from wooded, rocky riverbank at Hook Mountain past a rock quarry, luxury housing, village, power plant, town dock, and marina—hauntingly echoes the development of the region as it passed from Native to European and later American hands.

That history was not without a darker, tragic side.  Beavers, whose fur was a valuable commodity due to the popularity of felted beaver hats, were overhunted, and fierce competition for the trade, between indigenous as well as European nations, resulted in international warfare.  In addition to war, Old World diseases decimated native populations, and despite their hospitality to the newcomers, unscrupulous colonists marginalized them and dispossessed them of their land.
Courtesy of the artist.