When Mastrovito visited the Island’s “enchanted landscape [and saw] its empty houses and its only inhabitants (squirrels, ducks and other small birds and rodents),” he conceived of the possibility of mixing up all these three elements, to recreate a new order in Governors Island’s (still) life.”

His starting points for this site-specific work are the two most common forms of home recreation – books and television. The title of his installation refers to H. G. Wells’ famous novel The Island of Doctor Moreau, in which the archetypal “mad” scientist experiments upon animals in order to give them human traits. In this “Island,” the artist substitutes himself for the doctor, trying to instill a new life into that which was once alive in a different way (books from paper, paper from wood, and wood from trees). Mastrovito imagines that the outside fauna take control of the abandoned house and become its proper inhabitants. Approximately 700 books were brought under the artist’s knife to cut out real-size images of animals. This trompe-l’oeil, or paper diorama, also suggests the strength of images, the infinite possibilities that knowledge – through books – can give us in order to create and re-create the world that we can only imagine.

All those paper-animals stare at the audience in a curious and disturbing silence, and they move together – motionless – toward the second, smaller room completing their humanization by watching television. Bawitdaba, the video screened on the old television set, features the absurd travel of a plastic monkey and a plastic pig through a celluloid world, where the two animal-human characters re-interpret some of the most famous movies of all time (here the artist uses the original audio and the exact sequence of editing of each movie). The sequence enacts the continual struggle for life starting on the island where the Strangelove-monkey falls with its bomb, and ending, like in Wells’ novel, with death and chaos and the evident impossibility of forcing nature’s limits. 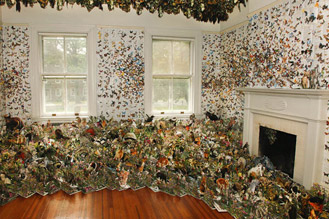