Siren’s Song emerged from a contemplation of the exhibition’s theme in general and the Ship of Fools project in particular. I had been concurrently listening to the Talking Heads “Once in a Lifetime” and following the Somali pirates’ debacle of being captors as well as captured upon the orange lifeboat that fit neatly on the television screen.

The refrain “And you may ask yourself, well, how did I get here?” brought to mind a ship in a bottle where the first question asked is “How did it get there?”  The song’s lyrics pose the conundrum that eventually enters into all of our lives at some point. The image further evolved by turning the bottle as if the cork was bumping the picture plane, pushing to get out.

The legend of the siren’s song from Homer’s “Odyssey” with the hazards to sailors upon the rocks was another thread that seemed to fit the nautical circumstance in the image. Here the siren is a two- tailed mermaid. The siren is painted in some detail so that the viewer is also drawn into the painting and unwittingly repeats the action of the sailors by being drawn in to the siren.

The Jester’s Dream incorporates the dual notions of “vanitas” with our hope of beating the odds. The house of cards echoes the fool’s cap (that gradually permeated into the dunce’s cap of the school room of the 19th and early 20th century). The jester/fool spends his life supporting the “king” as it is his life’s work, his purpose, his sole focus. 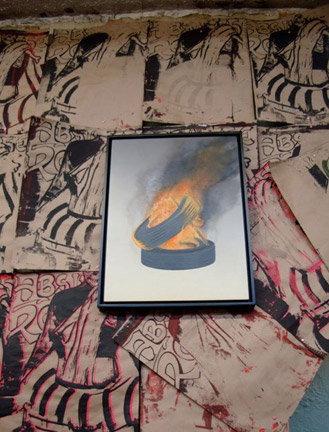