Chris Jordan‘s augmented clock installation utilizes light, shadow and movement inside the iconic clock tower, visible after sunset and before midnight from outside the 14-story Queens Plaza Bank of Manhattan building. The installation depicts a queue of silhouetted people, moving across the four clock faces. The rate of movement correlates directly to the population increase of New York City in real-time, while the flashes of light mark the rate of extinction of a species.

Jordon’s work examines the changing movement of light, and the environmental impact of overpopulation, from the historical perspective of a landmark that has seen the city expand by over two million people since it was built. The work challenges the community to correlate time with the ever-increasing population of the city. Landmark and spectacle are made mundane through the use of simple shadow play, in the form of waiting in a line.

The installation is constructed of 100% recycled/repurposed materials, using technology available in 1927, at the inauguration of the clock tower. 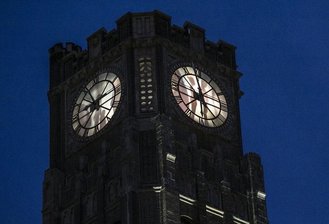