“My first impressions of the Andrew Freedman Home were very institutional”. Walking into the home for the first time was like entering some Vanderbilt mansion that had fallen into disrepair and had not been occupied for decades. Peeling paint, leaking ceilings, old carpeting and rusted pipes added to an ambience that could best be described as “eerie”.I can only imagine that the occupants here lived a very regimented life where breakfast, lunch and dinner were served at specific hours. Any medical needs were addressed in house. They probably rarely left the confines of the home. All this was evident to me.

I wanted my installation to be the opposite of all that. I created an environment where, upon walking into my room, one is confronted by an oncoming rush of colored clouds. The room is warm and inviting. Standing in it’s center one feels a part of the installation. Not only as a viewer but as a participant. The imaginary characters that sit upon the clouds were inspired by the animated films “The Yellow Submarine”, and “Alice in Wonderland”, but with a more urban twist. The image of a father giving his son a piggyback ride represents me walking into this installation and showing my son this strange and wonderful world for the first time.”

Andrew Freedman was largely responsible for creating New York City’s subway system. CRASH, an artist widely regarded as a pioneer of the Graffiti art movement, began his career spraypainting murals on subway cars in the 1970’s. Here he presents a walk-in subway map, created with spraypaint. Names of CRASH’s former collaborators during the mid-1970’s are written by the artist upon untiled sections of the walls in the adjacent room. 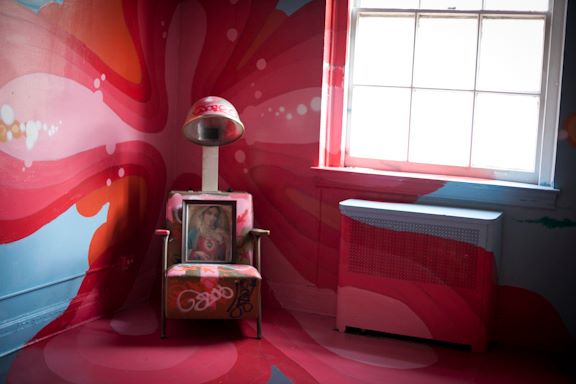