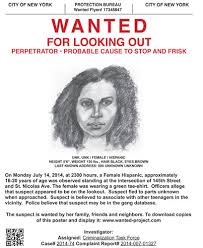 In the community-based project Wanted (2014), created for the exhibition If You Build It in Sugar Hill, Harlem, a series of flyers seek several youths discriminatorily accused of suspicious behaviors. One flyer, for example, accuses a black male because he “exhibited dress and behavior typical of alleged gang members.”

Another flyer perpetrates a young Hispanic woman who “appeared to be on the lookout.” In this particular piece, he uses portraiture to address the criminalization, racial profiling and mass incarceration of black and Latino youths in the United States.

A product of transcontinental collaboration, Stop constructs an enclosed corridor space featuring life-sized images of young men from East New York, Brooklyn on one side and young men from Liverpool, UK on the other. With the trios delineated in a manner imitating classical triptychs, each figure repeatedly states the number of times they have been stopped by the police without cause. These statements are sometimes staggered and other times overlapping and interrupting, causing the voices multiply and fully populate the space—representing the numerous others in these urban spaces that experience criminalization due to their appearance. By having the viewer literally face the individuals that certain authorities deem threatening, Stop openly critiques the purported efficacy of zero tolerance policing strategies from the perspectives of those directly impacted.

Stop was originally created as part of Postcode Criminals, a series of workshops run between Dread Scott, Joanne Kushner and young adults from Brooklyn, NY and Liverpool, UK. Each artist worked with youth aged 14-22, teaching them photography and how to address the effects of police intervention on their lives through their own lenses.

To be manifest both within the walls of the If You Build It exhibition and on the streets of Sugar Hill, Harlem, Wanted addresses the mass-incarceration and criminalization of Black and Latino youth within the United States. Responding to New York City’s harrowing stop and frisk statistics, the project strives to generate community awareness and conceive possible solutions to the criminalization of youth within urban spaces. Involving the production of a series of quasi-wanted posters, each Wanted piece features a ‘police sketch’ of youth with a description listing a non-illegal activity for which they are wanted.

Coinciding with these pieces are two public forums—each of which features talks by activists, educators and legal experts in the field that further raise awareness about the criminalization of youth, police harassment and the implication of stop and frisk. Through this multi-faceted approach, Wanted opens up a multigenerational dialogue about police intervention in the daily lives of young lives—encouraging both critical reflection and constructive problem solving in response to these invasive policies.