We Are Not Numbers, (2012)
Photography, video and postcards
Dimensions Variable

Enmedio‘s work lies between artistic practice and social intervention and takes the form of actions in the public sphere to call attention to injustice.  In one such action, “Evictions Are Not Numbers, They Are Faces and Eyes” (2012), Enmedio (Spanish for Among) pasted portraits of evicted Spaniards onto the windows of banks around the country.  The Faces of the 99% aims to inform New York audiences about Spain’s current wave of evictions as well as to provide a platform for action.

The installation contains a large portrait of one individual affected by the economic crisis who was threatened with eviction from his home; a video projection presenting TAF’s actions and social practice against eviction, and a graphic chart offering relevant information on the economic and hosing situation in Spain, such as “There is an eviction in SPain every 8 minutes, 532 evictions a day during 2012’s first semester…”  Audiences are invited to write postcards to the financial institutions who are responsible for conducting these evictions.  The postcards include real cases and images of those affected as well as the address of the institutions responsible for the eviction.  Postcards will be sent to Spain in March 2013. 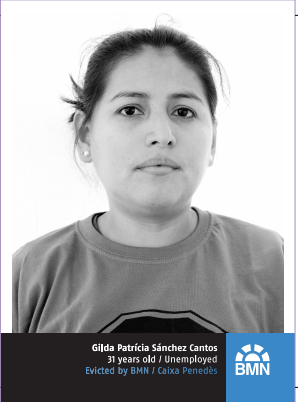