Ghost of a Dream 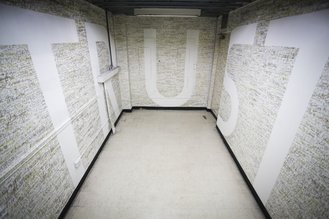 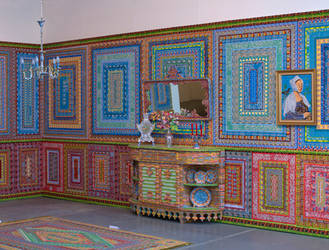 Be My Guest: The Art of Interiors

Ghost of a Dream is the ongoing collaboration of artists Adam Eckstrom and Lauren Was. Working with materials that often end up in the trash, they cross mediums to work with ideas of success, fame, and fantasy in contemporary culture. They focus on the opposing realities that exist around personal gain and aspiration to show people’s dreams as both avenues of hope and potential areas of exploitation. Whether it be a Hollywood film that transports the viewer into a dream reality or a lottery ticket that gives the possibility of a future full of rich decadence, these remnants re-create people’s dreams and portray the dreamer.

Dream Home is part of a trilogy that emerged from research about the most popular ways people who win the lottery spend their “spoils.” The three most common areas turned out to be buying a dream car, renovating a home, or going on an extravagant vacation. In each case, the dollar amount of the tickets used was equivalent to the sticker price on the car, the decoration of a room in a dream home, or a vacation.

HOW MUCH DO I OWE YOU?

Ghost of a Dream’s collective work began with long deliberation and research about what people dream about when they play the lottery. Finding that a new car is the most frequent purchase among winners, they decided to create a full scale Hummer H3, the that eventually became part of a “Dream” trilogy—Dream Car, Dream Vacation, and  Dream Home—all created with discarded lottery scratch-offs.

The Price of Happiness

The Price of Happiness was created during a recent residency of the artists in China in the Forbidden City and is made from US and Chinese loosing lottery tickets and Buddhist afterworld money. The work looks at the current state of affairs in both US and China’s housing and financial markets. In both countries there are abundant high-rises half completed and totally empty. At the same time, people are losing their homes and the banks are refusing to issue new mortgages so people can move into the empty housing. The Price of Happiness is a 30-foot wide collage made in the shape of a typical American house icon. The patterning on the side is directly referencing the painting found on the gates on traditional Chinese homes, and the vertical triangles represent the uncertainly of the stock market. While China and the US are locked in a power struggle of economic primacy, The Price of Happiness focuses on the hopes and dreams of the everyday person struggling to stay afloat in a punishing economic time.

In this connecting space leading from the area of transaction to the banking vaults, Ghost of a Dream have created this site specific wall drawing, TRUST. From a distance, the word appears to be floating in a giant vibrating gold color field but closer inspection reveals that this is made of thousands of bank signature slogans. With tag lines like “We know Money” from AIG, First Citizen Bank, “We put you first”, and Bank of America’s, “Higher Standards”, the slogans seek to create a sense of security and well being. As with much advertising, these slogans have proved diametrically opposed to reality, but we still give our money to these institutions and trust they are taking care of it for us. Fool me once, shame on you, fool me twice…

In Banks We Trust, 2012 Markers on wall with existing paint. photo credit: Whitney Browne, Courtesy of the artists

Be My Guest: The Art of Interiors