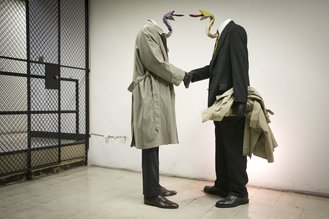 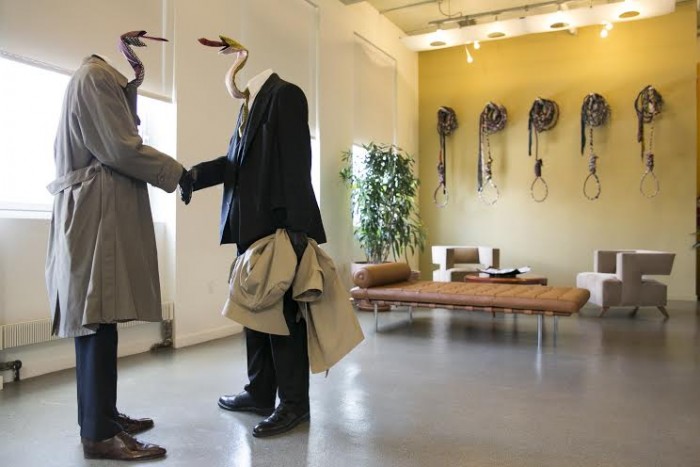 Collaborative duo Guerra de la Paz, composed of Alain Guerra and Neraldo de la Paz, experiment with unconventional materials and found objects to produce works that engage history, community, and politics. In the sculptural series Power Ties, the pair examines the capitalist business model. Inspired by the events of the 2008 financial crisis, Sealing the Deal (2009), which depicts two snake-headed mannequins dressed as businessmen shaking hands, addresses the corruption and shady deals that led to global economic collapse. Monday through Friday (2005) conflates business with bondage. Five nooses made of ties correspond to each day of the week, referencing the politics of modern labor conflict: the tension between financial “success,” and the oppressive conditions of wage labor.

A simple gesture with a powerful impact, the handshake ritualistically demonstrates that the hands hold no weapons while it conveys trust, balance and equality. In the business and political worlds, this simple greeting can also be viewed as a contractual bond – a compromise or negotiation – and symbolize the beginning of a pact or, in times when ethics are in question, a conspiracy.

The work, from the series, Power Ties, depicts two figures to identify with the affluent and authoritative image of success, sealing an agreement by shaking hands. Faceless entities like the powerful institutions they represent, their  viperous neckties suggest the underhand dealings and deceptions which have led to unprecedented earnings while the financial markets poised for crash.