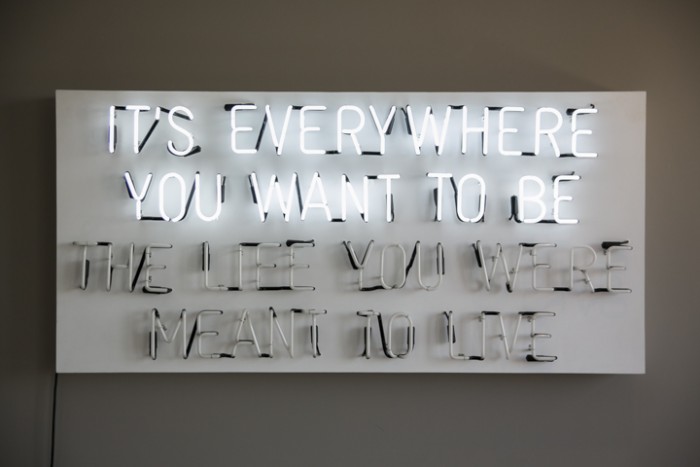 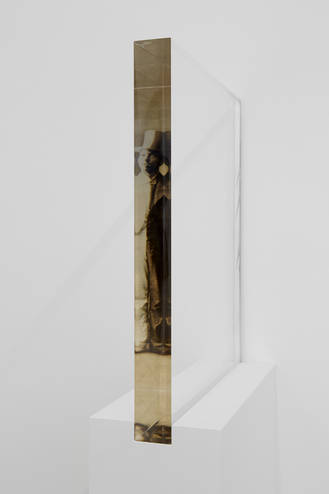 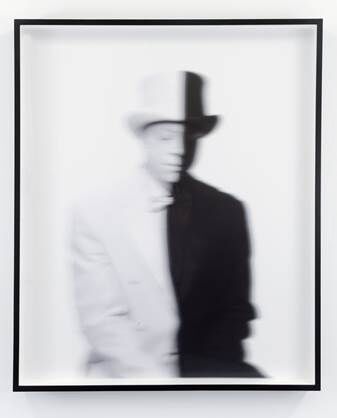 Harking back to outmoded neon signage of the 1950s, the title of Hank Willis Thomas’ Caesar’s Visa (2009) superficially invokes the corporate banality of its credit card namesake. Played out in the stark luminescence of its all-caps typeface, the pitched slogan of the eponymous company (“It’s Everywhere You Want To Be. The Life You Were Meant To Live”) alternately flashes on and off. The electrical wink of Thomas’ split phrases consequently reads like a hollow mantra to materialistic wish fulfillment, recalling too the deeper tensions and divides that skewer the idealistic aspirations of the American dream.

Calling to mind the overt racial politics that figure in Glenn Ligon’s neon works, Thomas subtly redeploys the seductive, coaxing jargon of Madison Avenue, imbuing it with a forlorn sense of sadness, of shattered promises and unmet aspirations—sentiments particularly resonant in light of the inequalities and racial injustices that still plague our societies. With their impossible promises of transformation, Thomas’ stark neon letters similarly recall the profusion of roadside church signs across the American landscape with its racial divide of dark and light.

Instigating a play between the sacred and the secular, Thomas’ Lightsaber (Diamond) (2012) possesses a detached elegance and formal sophistication, its cool colors and spatial abstractions suggesting some recovered relic—an old church window, or the decorative panes of a renovated brownstone. Whilst its material constituents (mahogany and Plexiglas) point to a clash of cultural registers, a dual association is also invoked by the diamond shape and its precious namesake—the rarest of stones and symbol of African colonial exploitation. The quasi-mysticism of the work’s title and its sci-fi connotations similarly points to an ambiguous slippage between high and low culture.

Hank Willis Thomas’ Intentionally Left Blanc alludes to the technical process of its own (non)production; a procedure known as retro-reflective screen printing in which the image is brought to life through its exposure to flash. Depicting a passionate crowd of African Americans—their attitude suggesting the fervor of a civil-rights era audience—Intentionally Left Blanc reverts in its exposed, “positive” format to an image in which select faces are whitened out and erased, the exact inverse of the same view in its “negative” condition. This dialectic of light and dark re-emerges when we view the same faces again, only this time black and featureless, a scattering of disembodied heads amidst a sea of white.

Deriving its title from Ralph Ellison’s novel, Invisible Man explores the conflicted question of racial identity and its theatrical enactment in U.S. history. Literally doubled by the reflective surface of the material, the work’s protagonist invokes minstrel show regalia and the ritual donning of black face makeup. Tuxedo clad and sharply bifurcated into black and white, he echoes the fashionably dressed figures featured throughout Hank Willis Thomas’ work: icons of social mobility and style whose identities have faded into memory.
Pictured: Caesar’s Visa, photo by Whitney Browne; Invisible Man, courtesy of the artist and Jack Shainman Gallery.

Photo conceptual artist Hank Willis Thomas uses his work to engage themes of identity, history, and popular culture. In Seeker (2012), Willis Thomas collaborated with Sanford Biggers, an artist also interested in the relationship between history, politics, and contemporary culture, to play with the idea of racial hybridity. This digital C-print, based on an image from the Robert Langmuir African American Photograph Collection at Emory University, presents artist Sanford Biggers as a remixed minstrel in a top hat and tails, his face and clothing bisected into two halves – one white and one black. In this appropriation of a flagrantly racist caricature from America’s vaudevillian past, Thomas highlights the entertainment value of a vaudeville performer; however, Biggers’ minstrel is not presented in the act of performing, rather he is captured in a moment of reflection.