Extended Play: TeWhenuaCentroChapineroCorona is a two-channel video featuring a guitar duet between two musicians, one in New York and the other in Mexico. Each musician performs on half of a classical guitar in their respective living rooms—Sebastian Cruz, originally from Chapinero, Bogotá, performs from Corona, New York City, while Misha Marks, who grew up in TeWhenua, New Zealand and once lived in Corona, performs from Centro Historico, Mexico City.

The first “split” duet of its kind, the piece was originally performed live via an A/V feed. Artist Jane Benson synchronizes the scored and improvised musical dialogue, exploring the musical and social aspects of division and connection. Facilitated by technology, the sounds develop and expand alongside each other, and the musicians engage in a collaborative interaction between diverse traditions.

Extended Play: TeWhenuaCentroChapineroCorona explores the role of technology in breaking down national borders, offering the possibility of new modes of cross-cultural communication, understanding and unity.
janebenson.net 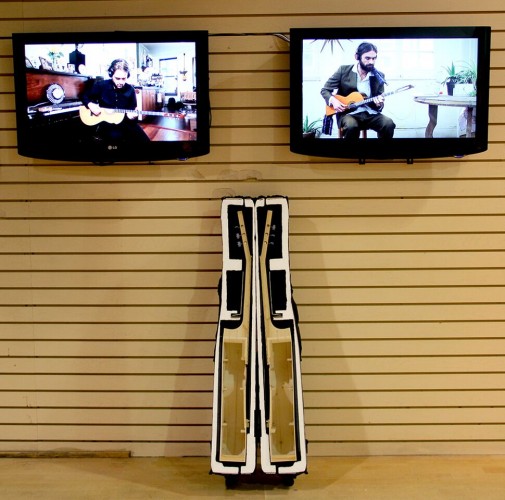