Plants have long been linked to fortune and success. Basel (from the Greek Basileus meaning king) in particular has been used since ancient times to ward off evil spirits and can still be found outside many small immigrant shops in Queens to bring good luck. Lavender (from the Latin lavare, to wash) has been considered a great antiseptic and used as a cleansing and relaxing agent. It is also said to attract money. Money itself has been associated with smell in many popular sayings such as, “Follow the money”, “I can smell the money”, “Wake up and smell the roses.”

Smell of Success taps on memories triggered by scents and dreams that banks have generated – some of savings and success, others crushed and ending in debt. Castro sees this outer foyer before one enters the old bank as a kind “cleansing chamber.” By making an intervention here, the bank is allowed to get new dreams, acquire a new life (as it is indeed doing with the present exhibition) and become an opportunity for change. Visitors are invited to touch the plants and get a “cleansing” of their own by embracing the plants’ scent and energy. 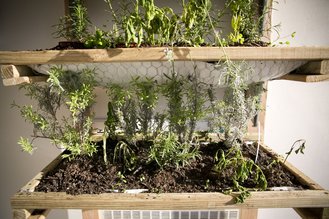