Mary Walling Blackburn’s Anhoek School is an ongoing, yet nomadic, pedagogical experiment. Based in Brooklyn, New York, Anhoek School has traveled to Austin and Marfa, Texas and will be in San Francisco and Denmark in Fall 2010. The school fools with educational structures and investigates alternatives to traditional American education at a moment in time when many experimental schools have closed (Black Mountain School and Chicago’s Hobo College) or ceased to develop inventive and/or radical methodologies.

For “The Sixth Borough,” Walling Blackburn has devised a set of tutorials on “Radical Citizenship” – a theme chosen for the triangulation of Governor’s Island, Ellis Island and the Statue of Liberty which, both geographically and symbolically, point towards an investigation of citizenship – as practice rather than status.

Over 25 tutors, ranging from archaeologists to musicians, artists to farmers, will provide one-on-one tutorials with visitors to the island. Each tutor will offer a separate deconstruction of citizenship, offering abstract and concrete examples and investigations of radical citizenship, an unregulated form of belonging. Each tutorial will be broadcast real-time by a radio transmitter throughout the island, allowing other visitors to listen in via portable transistor radios from the lawns. This expands the classroom into something simultaneously intimate and “long distance.”
Both coasts will be simultaneously activated, in August and September, when  Anhoek School offers tutorials on Angel Island, the historic site of immigration processing for the West.

Each participant creates their own tutorial that elaborates on their own specific interpretation of the topic and what information they wish to discuss with their student/collaborator/visitor. The length spent with each student/visitor can range from 5 minutes to an hour. It will be a joint decision, negotiated on site.

Adjacent to the room where the tutorials take place, a waiting room as constantly shifting installation is located. After each tutorial, the objects within the waiting room, chairs included, alter.

The Participants over the summer will include:

The chairs for the installation were kindly provided by “Build It Green!NYC.” 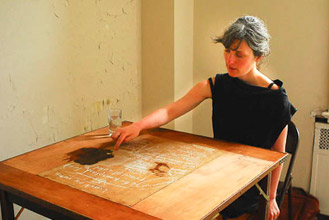