Money Talks is an audio-video installation based on Enright’s anonymous financial $urvey taken by 88 artists.  Answers were analyzed and numbers were crunched.  Using footage from the bank itself and words from the actual participants, the video gives voice to a large group of artists in difficult financial times.  The result is a frank and detailed examination of the financial realities of this community – a snapshot of a moment in money.  Presented in a dark, vault-like space underneath the bank, the work explores a taboo subject and shines a light on the secret life of money in the art world.

The Free Flag now flying on the flagpole on the Freedman Home grounds offers an homage to the founder (FREEdman) and a hint of the economic preoccupation of the home, while signfiying the free zone of art. In addition, the Free Flag is a symbol for global citizens who wish to feel free – to travel and live wherever they choose. In the contemporary globalized world there are growing numbers of people with complex relationships to nation states; people born between borders and laws, with no clear status, or with multiple citizenships. Many have an overarching loyalty to the planet rather than to an artificially delineated territory, and therefore an uneasy association with flags. Traditional patriotism seems outdated in a global age, yet the world continues to organize itself and wage wars around contrived and arbitrary lines. Global citizens recognize that we are all prisoners of nations; we are banned from leaving a country without the permission embodied in a passport, and barred from entering a country without the consent of border bureaucrats. Rather than representing a certain territory, Enright’s flag stands for those who yearn to be free.
Exhibited at This Side of Paradise

An audio sculpture consisting of antique typewriters and a dilapidated piano scavenged in the Andrew Freedman Home, The Ravages is a reflection on the passage of time, memory, decay, and loss. The music is a recorded performance by Nicky Enright backed with typewriter percussion sounds. It presents a nostalgic and slowly disintegrating son montuno that speaks to both the buildings’s past and the Latino origin of many current Bronx residents. The finger-operated nature of pianos and typewriters evoke the people who actually used them when the Home was operating, giving The Ravages a ghostly dimension.
Exhibited at This Side of Paradise 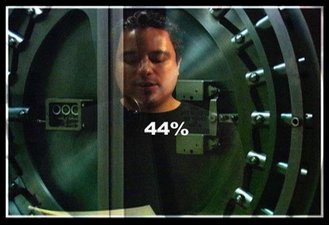