Vive le Capital is a deliberation on the complications of our relationships with money travelling through some of the key points in the history of money and arts patronage. The plot pirouettes between the protagonist’s soliloquy in French, and two dancers who respond in various transgressive ways against him. The trio travel to the time of Cosimo De Medici, the famous Italian patron of the arts- and visit the origins of our banking system; they pay homage to the French Revolution and embody John Law, the first Ponzi schemer in history.

The site for the film is 14 WALL STREET — the former Bankers Trust building. Bankers Trust’s fraudulent activity was recorded and used as evidence in a trial that led to its dispersion in 1998. Amongst other sources, fragments of the original court transcripts were incorporated into the film’s text. 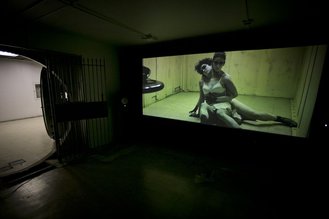