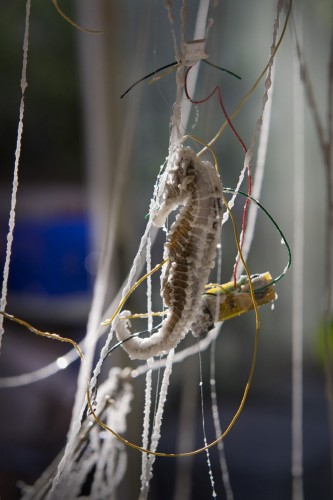 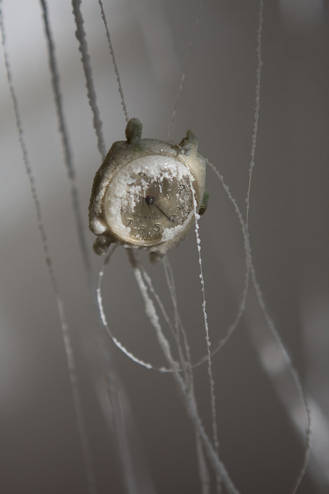 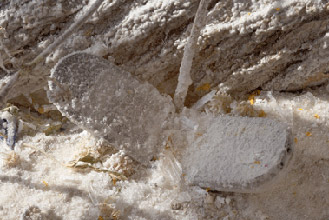 The term “totem” refers to a non-human form that guards over a group of people such as a clan or tribe offering them both physical and spiritual protection.  The Totem is seen as a connecting force between animal, human and spiritual realms connecting a people to the wisdom of the ancestors. “Through the totem we hear the voice of our wise ancestors. They speak of our present relationship with the earth and the future to come,” says Rubio.   This totemic installation brings together objects from domestic, industrial and animal life, transforming each element into a strange and complex structure where meanings shift and change in their juxtaposition in the new salt-made habitat.

Rubio applied hundreds of coats of salt solution to each element in the totem. As the solution builds up, magnificent salt crystals are formed, giving a mysterious new beauty to the abandoned objects and forms.  In choosing the salt, Rubio wants the viewer to experience the piece as a parallel with the remote past, as in the story of Lot’s wife. Lot’s family is urged by the angels to leave the pernicious city of Sodom and not look back. “Escape for your life! Do not look behind you nor stay anywhere in the plain. Escape to the mountains, lest you be destroyed.” (Gen. 19:17). But leaving the city of Sodom, his wife turns back to look for all she has left behind and is converted into a statue of salt as punishment by God.

Sodom and Gomorra (2009)
Installation of salt encrusted on objects

Raimundo Rubio has taken over the two window cases of the fishing tackle store resplendent with hand painted vistas of sand, sea, seagulls and light house. Within these spaces he has created a salt encrusted landscape, replete with tokens of everyday life before they were “frozen” into fossils by the salt – a shoe, a bracelet, a cell phone – relics of a bygone era. As Rubio comments:
“My idea was to represent today’s economic and environmental chaos caused by the avarice and greed that runs through world finances, consumerism and industrial food systems.”