During their 15 year collaboration, Rosane Chamecki and Andrea Lerner created more than 10 evening length dances that toured internationally to much critical acclaim. In 2007, their premiere of “EXIT” was a good-bye to their dance career and marked the beginning of their filmmaking collaboration. In 2008, they were awarded the prestigious Guggenheim Fellowship to support translating their unique visual, movement poetry from stage to film. Together with filmmaker Phil Harder, they produced “FLYING LESSON”, which has already won several awards. Philip has directed more than 200 music videos, numerous short films, and commercial projects. His credits include companies such as Gap or Hewlett Packard as well as artists like Prince, Foo Fighters or Incubus, just to name a few. He has earned several top distinctions including an MVPA award for Best Alternative Video, MTV Awards video nomination, an AICP Video, SXSW short film award, and a nomination for MVPA’s Director of the Year.

Rosane Chamecki and Andrea Lerner
BACK TO ARTIST LIST 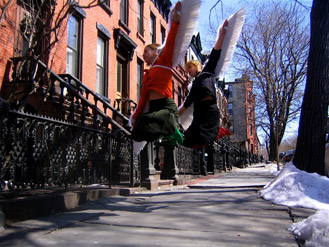