Give and take is part of an ongoing series in which Randolf has been using the social dimensions of money as the basis of an interactional and interventionist art practice. She gives away money in streets, stores, galleries, talks, dinners, cafés, sometimes anonymously, sometimes in groups or person to person―often to people who give it away in turn. Because money is caged in rules, simply acting outside these rules opens up new ranges of social action and interaction.

The money serves as a provocation for thought, conversation and feelings of comfort or its opposite. From either side of the equation emotions are brought into play―greed, anxiety, stinginess, as well as excitement, generosity, pleasure. For Randolf, the artwork happens inside the other person as they experience the situation―as they think about, give away or spend the money.  In this installation, visitors are invited to either take or leave some money in the plates. 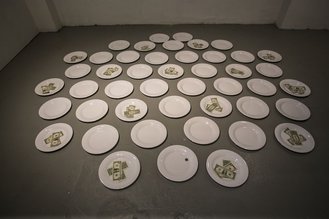