Sean Slemon’s work investigates the relationship between nature and human society. His concern is less the depletion of natural resources by rapacious growth (although that issue is not altogether absent) but more specifically the access to land and natural resources as determined by (political) power and wealth.  As Sleamon states, “Looking at social inequality in urban spaces through the lens of natural resources such as sunlight and street trees underscores both the active and passive decisions we make as a society.”

In Goods for Me, a peach tree has been cut up into its component parts and placed in plexi boxes like merchandise in a store. The stacked cases measure and quantify the commercial recourse the tree has now become, from leaves, to twigs, to branches to roots, isolating which aspects of the tree will bring most money as it is turned into furniture, lumber and the like.
Exhibited at How Much Do I Owe You?

Slemon’s work has looked at nature and how it has been co-opted in order to create profit. Pine Tree suggests a Midas touch –  a tree transformed into gold – the prized commodity of access to nature and light in a urban setting.  But this tree is, in fact, not a tree but made from pine 2×4 boards that are carved, polished and brought back full cycle as the tree to which they once belonged.
Exhibited at How Much Do I Owe You?

“Having lived and worked in South Africa and then New York, the things that struck me about these cities were the exact opposites. In one poverty and inequality is so blatant. In the next those disparities exist, but are hidden on different levels. It’s almost as if wealth and efficient infrastructure of the greatest city in the world has actually tricked itself into hiding it’s problems from its owners. I began to identify areas within the infrastructure of the city that were forgotten- nature, light and the shape of the land: basic things that we take for granted but that affect our lives everyday, and I work primarily with these concepts.

In questioning our use of space, I explore politically charged issues through subtle signifiers. I believe that looking deeper at land and nature uncovers history and facilitates transformation. The work I have been making over the past few years has begun to move in a more conceptual direction along these lines.

Confrontational discourses surrounding space and land can expose histories and legacies. They can never be re-examined enough, and each generation brings new meaning to a place and must make an effort to understand the past in new ways.

Looking at components of urban life reveals neglected aspects through the underscoring of issues. Once the issues are magnified, we can see the social implications of them, revealing shortcomings within urban space. Each city has very subtle signs and signifiers, and via these I work with a site. I adapt these ideas directly into a gallery space, or create work based on a site. I want to push the physicality of the work to make use of the space it inhabits in an effort to have the work and the site collaborate together to communicate the concepts efficiently.”

“Light Beam at 7 am” is a site-specific installation which shows the viewer in material form what the potential sunlight could be in the Caledonia space, if the sun was not blocked by tall buildings on the opposite side of the street.  The light beam installation is constructed from construction plywood-converting an industrial material back into a natural occurrence.  The plywood beam has the four edges open by a half inch, to allow bright light to flow out of them, as they run from the window to the floor.  Eight fluorescent lights light up the 20 ft. length of the beam. 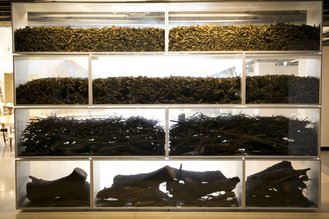 Goods For Me, 2011 (depicted) Tree, plywood, plexiglass 96x144x18 in Courtesy the artist and Magnan Metz Gallery