The Restpfennig Campaign collected unused economic and intellectual capital – ideas and wishes – in the form of one German Pfennig coins from 1998-2002. 13 tons of coins were collected in public space throughout Germany. The public collection sites were located in Berlin (Alexanderplatz), Munich (Marienplatz) and Nuremberg (Königstrasse), as well as smaller collection sites and thousands of private collection boxes. 1,601 ideas and wishes were gathered through letters, e-mails and interviews. An integral element of the concept was to involve the public in the decision-making process of what should happen with the collected coins and visions. 1,087 people applied to be a part of the decision committee. Of these, twelve were randomly selected on 3 April 2002 in a public event and invited to decide which of the 1,601 ideas and wishes should be realised.

The committee met for two weekends in May and June of 2002 in the ACC Gallery in Weimar. On the first weekend, they collectively worked out a list of criteria and they decided upon rules for voting. On the second weekend, they chose four wishes.

In June and July of 2002, all of the collection boxes were emptied, publicly sorted and brought to the appropriate national banks for depositing. Over the four and a half years, hundreds of thousands gave their spare pennies. There were 1,601 idea donors and approximately 500 people actively helped the project. Many institutions, government officials, prize juries, decision makers and private citizens helped to make this project possible. The wishes were realized between 2002-2007.

As an art project in public space, the Restpfennig Campaign posed three
questions:

The Restpfennig Campaign was my artistic attempt to take the responsibility “to make the future, that we want or do not want, an object of civic discourse.”

The Restpfennig Campaign accumulated cultural capital in the form of a comprehensive wishing and idea archive; it accumulated social capital in form of the interested people and volunteers as well as economic capital in the form of approximately 13 tons of coins – not to mention project funding. ‘’To collect left-over pennies is an economic nonsense’ was a pivotal statement at the beginning of the project in 1998. It was a crucial question, whether and how it could succeed to move these quantities of ‘waste money’ in such an economically driven world and then convert it into intellectual capital. A further, crucial question related to the decision-making process regarding this accumulated capital, which was delegated to a representative public.

Thanks to thousands of hours of unpaid work, project funding, sponsoring as well as a full-time volunteer it was possible to use the largest part of the Restpfennig mountain for the realization of the selected four wishes. My three initial questions could be answered positively despite the ‘economic nonsense’: the visionary potential of an idea could accumulate an immense cultural and social capital. Thousands of people participated on their own impulse. Unused capital of this kind exists in our society. In 2003, a book was designed to give an adequate form and public to the intellectual capital of the project (desires and ideas). The desires and ideas form an important part of this art project; they are the engine of my work. Furthermore the book served the reflection of this work. 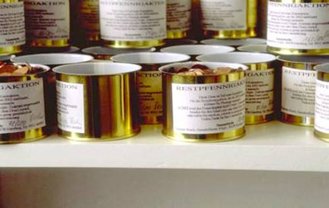