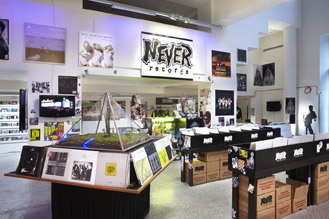 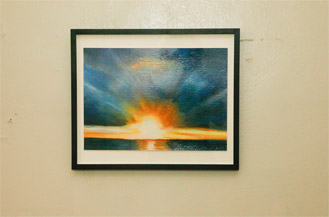 Never Records is a multimedia multi-artist installation composed by artist/musician Ted Riederer. Constructed to resemble a functioning record store, including record bins, poster racks, large reproductions of fictitious album covers, and a stage for in store appearances, Never Records is a tribute to the record store as a locus of music, art, and community. Including over 30 artists, record labels, and musicians, Ted Riederer’s interactive installation is part Max Ernst part Hi Fidelity.

“In the Heart of Nowhere” is a transcendental poem composed like a ransom note with the blacked out covers of over three hundred record albums. Blacking out all of the album covers except for the words and phrases he chooses, Riederer places the albums in sequence in two record bins (12 feet each). Re-appropriating album images, Riederer illustrates his poem with record covers where the title and band name have been painted out. The poem must be read by flipping through the racks. The records were donated by Yesterday and Today Records, Academy Records, Elevator Music, Asian Man Records, and Sacred Bones.

I.
In the heart of nowhere
At the end of the beginning
We are all set adrift
Under skies of vermillion and silver

II.
Welcome to tomorrow
This is the age of alarm
These are ghost stories
Tales from planet earth.

III.
Our world
The one rare earth
Will never be the same
This is the turning point.

VI.
As the sun gets hotter
The vapor of gasoline in the wind
Will catch fire.

V.
The great lonely city
Is a dead memorial
To days of wine and roses.

VI.
Living in danger
We are walking a changing line
A battle of heaven and earth

VII.
So many men witness universal struggle
Around the world and preach
How they are different from others
And lie “It could never happen here.”
We are all destroyers and refugees
Connected by a bitter history of abuse

VIII.
The makers sing us to sleep
In a dreamland of product in paradise
Alkaline dreams murder minds

XI.
The rebel youth are hungry
For some kind of spiritual voyage.

X.
Resist the in-crowd
Who dance their danse macabre
In a theater of suicidal tendencies
Fight the status quo
Fight for love
Ideas are bulletproof
Like germs we will take hold of the system
One cell at a time
Some people cry “cultural decay” others Scream “revolution.”

XI.
The feeling that
It’s more than you
More than you know
Is the true meaning of brotherhood.

XII.
Look no further
Tear down the unopened door inside you
The ghost in you
Dreams of emancipation
Crossing a bridge that just won’t burn
You alone can save you.

XIII.
Believe in the midget and the giant
Diamonds and rust
Death and transfiguration

XIV.
In time a song shall rise
For those who believe in the wisdom of looking in
Street songs
Songs for sinners
A lullaby in tongues
The sweetest sounds
And the most beautiful noise

XV.
I will wait of you
In the diamond night
Alone together
With eyes that see in the dark

We will wait for the golden dawn of redeeming grace.

In October of 2008, artist/musician Ted Riederer traveled to the opposite side of the Earth from New York City. On the shores of Cape Leeuwin, Australia, the closest land to the geographic antipode of New York, Riederer spent over a week composing music with an electric guitar and a battery powered amplifier at sunrise and sunset.

He documented these moments with a series of photographs and en plain air oil paintings. The five paintings in this room are all derived from this source material.
Visitors are encouraged to sit and consider these landscapes of the other side juxtaposed with the views of Governors Island through the windows of this side, and to contemplate the space between.

In the Heart of Nowhere (2010) Multi media installation