Something Out Of Nothing

How Much Do I Owe You?

Dollar Bill Y’All is part of a larger installation of works on paper entitled Mr. Hangover with each individual work in the series considered a “poster,” sized to the sort of poster that one finds in a teenager’s bed room or wheat pasted around major cities all over the world.

Dollar Bill Y’all in particular was Sanford’s reaction to Damien Hirst’s, For the Love of God, an encrusted platinum cast of an 18th century skull covered with 8,601 diamonds. The Skull cost Hirst 14 million pounds to produce and has gone down in the Guinness Book of Records as the most expensive artwork ever made.  While according to Hirst, the piece was a reflection on death, in the heady art market in which it was conceived, it seemed also a commentary on the highest level of commodity to which blue chip art had ascended.

The voice bubble,  “Dollar Bill Y’all” was appropriated by Sanford from the famous Wu Tang Clan track “C.R.E.A.M (Cash Rules Everything Around Me)” and provides the appropriate editorial commentary on Sanford’s interest in Hirst’s skull.  The ‘poster’ brilliantly undercuts the polished and extravagantly over produced piece of the Damien Hirst bling.

Located in the Invisible Dog Art Center, Sanford’s mural recreates a (fictional) history of the street imagined into the present from Jonathan Lethem’s novel Motherless Brooklyn. 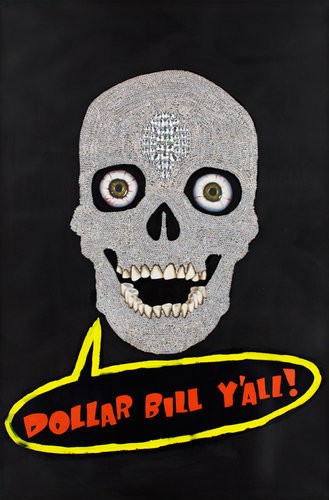