Three séance-like projections depict separate games of two individuals playing chess, while channeling the spirits of Marcel Duchamp and Bobby Fischer. NYC legend and exiled Grandmaster Fischer was the only American ever to win the World Chess Championship. Duchamp, who played for France in the Chess Olympiad, assumed the label of Grandmaster in Nguyen’s fictitious adaptation of The Da Vinci Code, titled Notes from the Invisible Box of Valery Osser. The first two matches took place in New York City and the third in Reykjavik, Iceland, site of Fischer’s 1973 World Chess Championship victory. As Duchamp turned his back on art, so too did Fischer with competitive chess. Or so they claimed. In MDVBF, the arguably greatest chess player ever, faces the arguably greatest artist ever.

Neo-Theo (Possessed American Flag) considers the legal cornerstone of religious tolerance and separation of church and state as originally imported to America via the Dutch settlement on Governors Island in 1624. An American flag with the words “help me” (a reference to the horror film “The Exorcist”) hangs on the wall, surrounded by photographs of gesturing hands that hark back to both stiff fascism and the original salutation for the “Pledge of Allegiance,” as written and prescribed by Francis Bellamy in 1892. A soundtrack plays of children reciting Bellamy’s original words, which did not include “under God” (added only in 1954). With the current wave of Islamic extremism, the Papal scandal, and Tea Party politics, it is fruitful to recall that indeed, it is not religion’s responsibility to breed tolerance or protect an individual’s liberties, but the law’s duty. The altered flag, even in this “theologically possessed” and “desecrated” state, but fully reversible, challenges our respect for the history and laws that protect our civil liberties.

Off Bravo is a playful, critical parody of Bravo’s upcoming art world reality TV show “Work of Art,” airing June 9th. Every week, Nguyen records a different viewing party that watches and reacts to the episodes. The artist, who also participated on “Work of Art,” subsequently broadcasts the alternative episodes the same weekend exclusively on Governors Island, using an old television placed in the kitchen. The viewer hears both the dialogue from the show as well as the immediate commentary and response from the viewers. The notion of reality television is literally turned inside out in The Sixth Borough, where one reality exists within and independent of another. 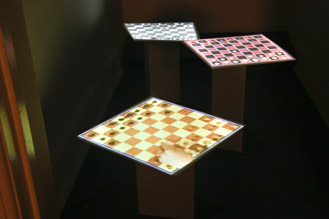