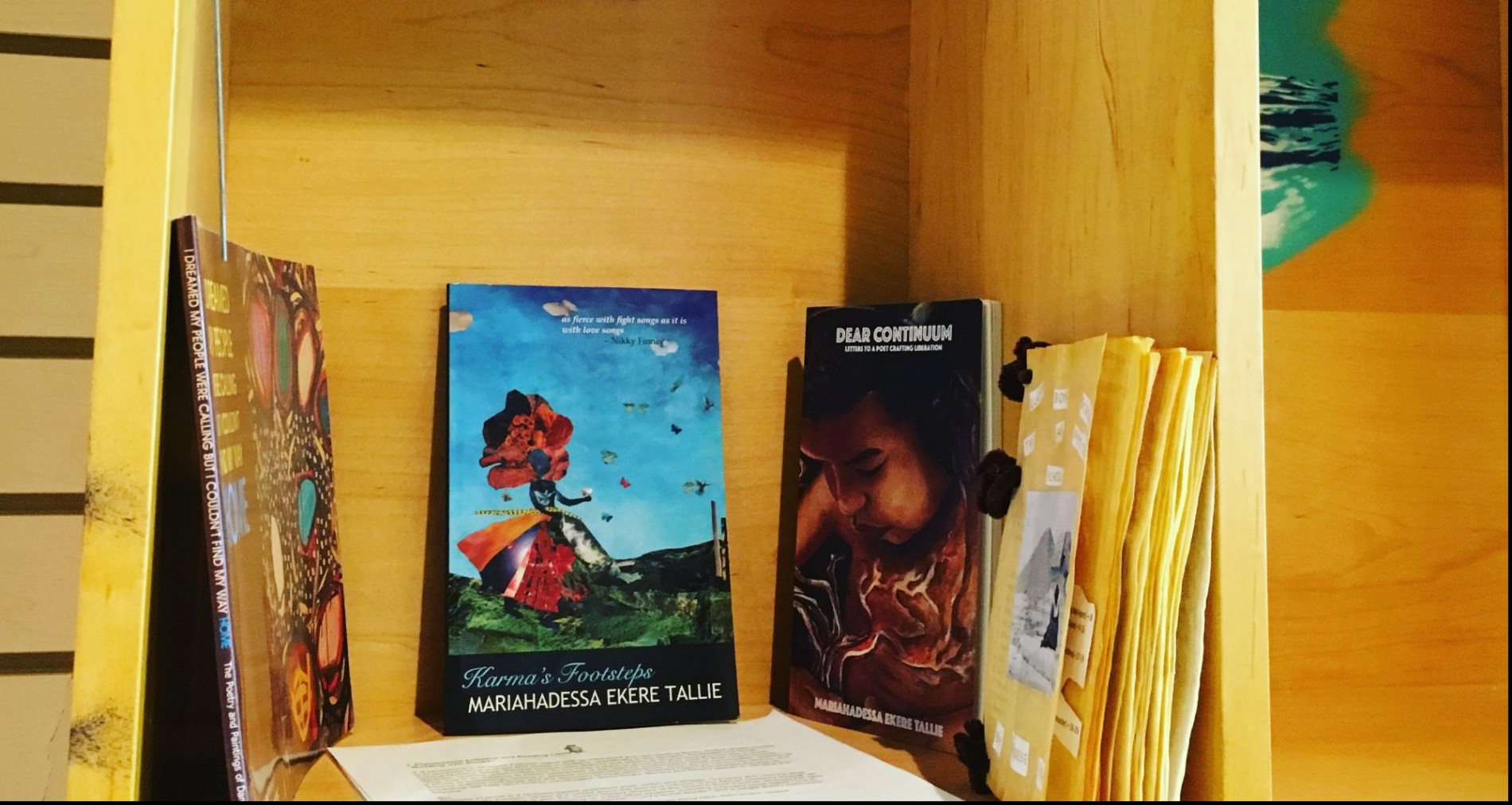 Prologue: A Dedication, Reading and Ritual

Note: If the campus gate on Archer is closed, proceed to 160th St. and turn right. Enter through the first classroom building on your right (after the church). Walk through the building, exit and turn right. The Chapel will be on your left at the entry to Prospect Cemetery.

Prologue: A Dedication, Reading and Ritual

Organized as part of the inaugural Southeast Queens Biennial: A Locus of Moving Points, Prologue honors the history of Southeast Queens and holds space for the future of the region’s literary community. Poets Amber Atiya, Desiree C. Bailey, Sherese Francis and Bob McNeil will read work engaging with Black diaspora and ancestry, intersectionality, and the personal and collective histories coming out of Southeast Queens. Artist Damali Abrams the Glitter Priestess will perform a tea ritual for healing at intermission. The program is presented by the 2017 No Longer Empty Curatorial Lab (NLE Lab) in partnership with J. Expressions, a Southeast Queens Pop Up bookshop and mobile library project founded by Sherese Francis.

Prologue is dedicated to the Afrikan Poetry Theater in Jamaica, Queens, which recently suffered a devastating fire. The Afrikan Poetry Theatre is a cultural anchor in Southeast Queens: a non-profit co-founded by the late Yusef Waliyaya and the late John Watusi Branch that has been serving the Jamaica, Queens community and beyond for over 40 years. The APT provides a range of cultural activities and serves as a gathering place for people of all ages and cultural backgrounds, offering a safe haven for young people to socialize, study and build skills.

The event is free and open to the public. Click here to register.
Donations will be accepted and gifted in full to the Afrikan Poetry Theatre’s restoration and recovery fund.

Amber Atiya is a multidisciplinary poet who incorporates elements of performance, book arts, and visual arts. Her poems and nonfiction have appeared in Boston Review, Nepantla: A Journal of  Queer Poets of Color, Pen America, Poets & Writers Blog, and elsewhere. A proud native Brooklynite, Atiya lived in Queens for ten years, mostly in Jamaica and South Jamaica. She is the co-editor of Sinister Wisdom #107: Black Lesbians–We Are the Revolution! and a member of a women’s writing group that will be celebrating 16 years in 2018. Atiya’s chapbook the fierce bums of doo-wop (Argos Books) is currently in its second printing.

Desiree C. Bailey is the author of the fiction chapbook In Dirt of Saltwater (O’Clock Press, 2016). Her poetry and fiction has been published in Best American Poetry, Callaloo, The Rumpus and Transition, among other publications. She has a BA from Georgetown University and an MFA from Brown University. Bailey has received fellowships from the New York State Council on the Arts, New York Foundation for the Arts, Poets House, The Norman Mailer Center, Callaloo Creative Writing Workshop, Kimbilio Fiction and Princeton in Africa. She is an assistant poetry editor at Anomaly and teaches English at the Borough of Manhattan Community College. Bailey was born in Trinidad and Tobago and lives in New York.

Son of the late John Watusi Branch, co-founder of The Afrikan Poetry Theatre in Jamaica, Queens, Saiku A. Branch is Executive Director of The Afrikan Poetry Theatre. He has held an extensive 18-year career in the field of Film & TV Production, with positions at Def Jam Island Records, Universal Music Group, BET Networks, A&E Channel, The Gospel Music Channel, PBS, DEJ Films, HBO, Fox Searchlight, and 40 Acres and A Mule Filmworks. Branch is a recipient of a Black Entertainment Television Award for Life & Death in Dafur, and a 2nd Place International Award (2009) and International News Award (2009), both from the National Association of Black Journalists. Committed to community work, Branch has worked as an after-school counselor, homeless shelter case worker, summer youth employment site monitor, field monitor, and summer youth assistant.

Sherese Francis is a Southeast Queens-based poet, speculative fiction writer, blogger and literary curator. She has published work in journals and anthologies including Bone Bouquet, African Voices, Newtown Literary, Blackberry Magazine, Kalyani Magazine, and Near Kin: A Collection of Words and Arts Inspired by Octavia Butler. Additionally, Francis has published two chapbooks: Lucy’s Bone Scrolls and Variations on Sett/ling Seed/ling. Current projects include her Afrofuturism-inspired blog, Futuristically Ancient; and her Southeast Queens based pop up bookshop/mobile library project, J. Expressions. For J. Expressions, Francis received a 2017 Queens Council on the Arts grant for the Reading (W)Riting Remedy series, and was a finalist for the Honey & Wax Book Collecting Prize.

Damali Abrams the Glitter Priestess is a project-based artist born and raised in NYC by Guyanese parents. She constructs spaces and experiences of fantasy and myth, using collage, video installation, and performance, that explore Black Utopia through the lenses of Afrofuturism and Afro-Caribbean syncretic religions. She examines folklore and contemporary popular culture, placing them in dialogue with one another to create a site of liberation for the Black imagination, rejecting tragedy as the sole dominant narrative of the Black experience.

Bob McNeil, a professional illustrator, spoken word artist and writer, was published in Whirlwind Magazine, The Shout It Out Anthology, Brine Rights: Stanzas and Clauses for the Causes (Volume 1), Not My President, Year of the Poet, Writers’ World Newspaper, We Cry for Peace (Swords of Words Book 2), The Annual Review of the Florence Poets Society, San Francisco Peace and Hope, and The Self-Portrait Poetry Collection. Unceasingly, McNeil composes artistic weapons for the downtrodden in their effort to fight oppression. His art wants to be a fortress against despotic politics that expresses one cause—justice.

The 2017/2018 NLE Curatorial Lab is supported in part by an award from the National Endowment for the Arts, public funds from the New York City Department of Cultural Affairs, the Laurie M. Tisch Illumination Fund, and Isambard Kingdom Brunel of North America.