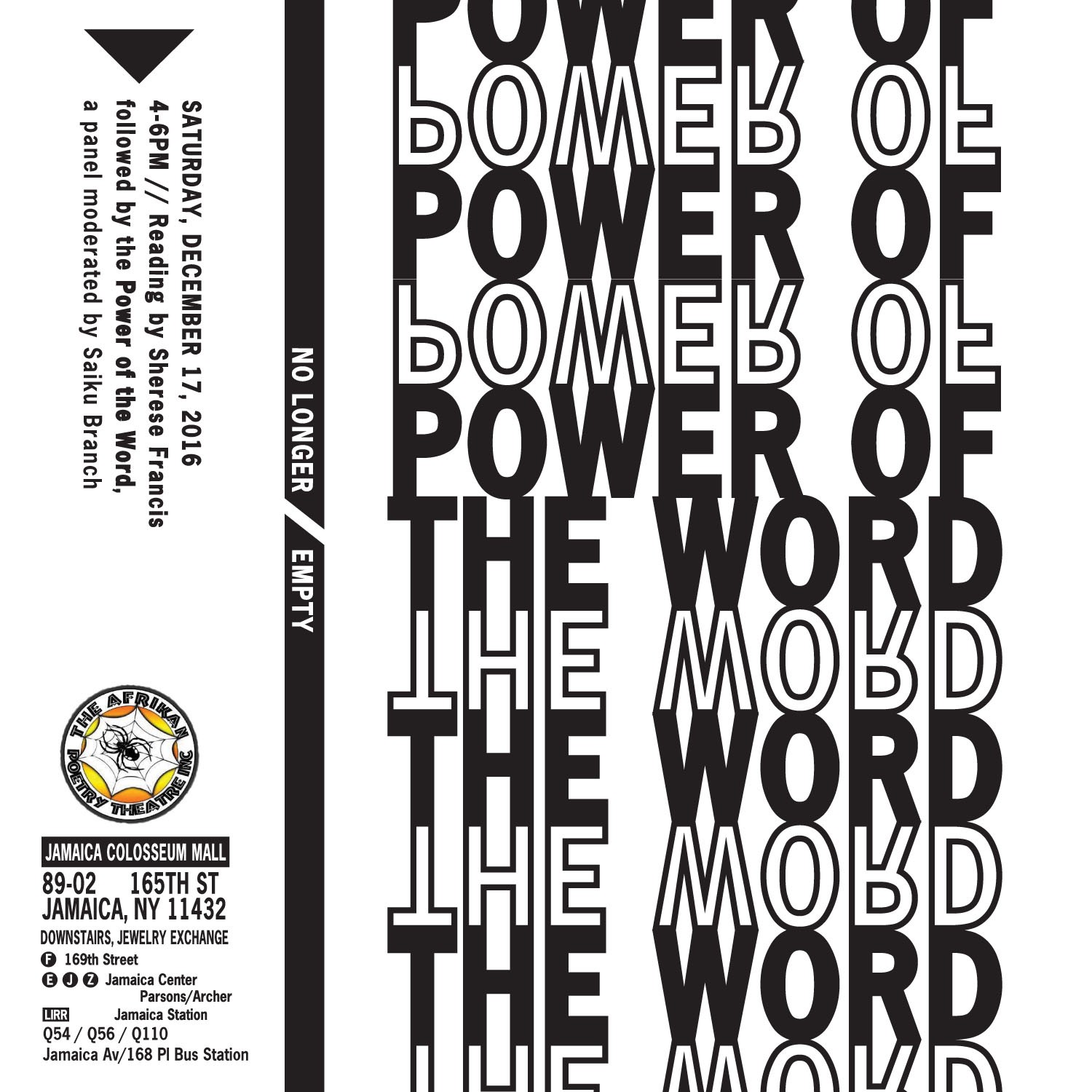 The Power of the Word

December 17, 2016
As part of the NLE Lab exhibition Remix Rememory, join us for a reading by writer Sherese Francis followed by The Power of the Word, a panel discussion moderated by Saiku Branch and featuring Sherese Francis and Barry “Sunjohn” Johnson. Sherese Francis will read from her upcoming science fiction novel The E. Set in Southeast Queens, the novel is inspired by the Underground Railroad and follows the character S.W. Isibe on her journey as a member of an underground team of agents with magical powers in a time-traveling E subway train.
The Power of the Word panel will discuss and celebrate the historical context of the Black Arts Movement, leading to the development of the Afrikan Poetry Theatre, and its continued cultural impact on American arts, culture, and political movement building.
BIOS
Son of the late John Watusi Branch, Co-Founder of The Afrikan Poetry Theatre in Jamaica, Queens, Saiku A. Branch is currently Executive Director of The Afrikan Poetry Theatre. He has held an extensive 18-year career in the field of Film & TV Production, and positions at Def Jam Island Records, Universal Music Group, BET Networks, A&E Channel, The Gospel Music Channel, PBS, DEJ Films, HBO, Fox Searchlight, and 40 Acres and A Mule Filmworks. Saiku is a recipient of a Black Entertainment Television Award for Life & Death in Dafur, and a 2nd Place International Award (2009) and International News Award (2009), both from the National Association of Black Journalists. Committed to community work, Branch has worked as an after-school counselor, homeless shelter caseworker, summer youth employment site monitor, field monitor, and summer youth Assistant Administrative Director for The Afrikan Poetry Theatre.
Sherese Francis is a Queens-based poet, writer and blogger of Futuristically Ancient, where she writes about the arts and cultures of the African Diaspora through an afrofuturist lens. Sherese is working on the fantasy novel The E, and a self-published chapbook called Lucy’s Scroll-Bones, as well a longer poetry manuscript. In 2016 she was the literary director of the Queens Book Festival.
Barry “Sunjohn” Johnson grew up in Jamaica, Queens, among a theatrical and musical family. Johnson began his musical career as a founding member of the award-winning band, 5 Karat Soul. He later collaborated with music producer Narada Michael Walden on three albums, a European tour, and U.S. tour. Following the tours, “Sunjohn” Johnson began playing bass, singing, writing and performing as the front man for the group Twennynine, featuring Lenny White. Twennynine appeared on various TV programs, including Soul Train, American Bandstand, the Mike Douglas Show, and the Dinah Shore Show. Johnson is one of the founding fathers of the Jamaica, Queens, sound, sometimes referred to as “Jamaica Funk.” He has recorded and/or performed live with Stevie Wonder, Chaka Khan, BB King, Stevie Nicks, Roberta Flack, and Mary J. Blige. He is presently writing music for an upcoming solo album, as well as producing a documentary that will chronicle the birth and development of the “Jamaica Funk” revolution.
#NLELab   #RemixRememory   #JamaicaColosseumMall   #ThePowerOfTheWord
RELATED EXHIBITION