Re-Purpose took over a small storefront space in the Lower East Side, where it examined the notion of repurposing objects, ideas, and images. Tracey Moffatt’s video collage, Doomed edited by Gary Hillberg, featured depictions of doom and destruction comprising of the editing of found footage in a highly entertaining and black-humorous take on the collective fear that we have had since biblical times of impending disaster. Moffatt created her own narrative from the mash-up of these scenes, building tension through an emotive soundtrack.

Janet Nolan makes sculptures from repeated singular objects recycled from the everyday world, such as hundreds of broken umbrellas that she installed in the space. She has no preconceived sculpture in mind as she accumulates these objects, rather the nature of the object itself suggests content and form. Through experimenting with their physical properties, structures and patterns often emerge that are similar to those basic growth systems found in nature.

Corinne Kamiya’s performative piece dealt with the desire to recreate some of the generosity of Hawaiian culture in an effort to cope with the somewhat different culture of New York. Gift exchange is an important part of her culture, guests for dinner generally bring a plate of food or a gift. This kind of exchange is built into their relationships and it reinforces the generosity shown to friends and strangers. She is interested in the relationships that art can form through the remaking of (sometimes) very personal items and how this direct approach opposes and supports her other artistic pursuits that are inherently solitary. Kamiya asked visitors to “Trade Your Pants,” and in exchange, she made them a new object such as a hat, bag, or apron. 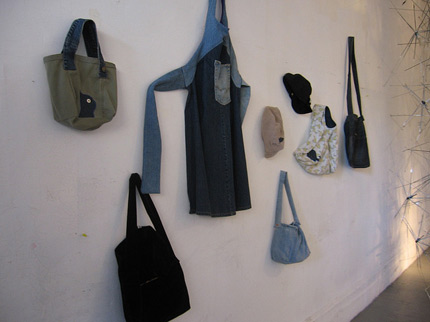 No Longer Bored: Re-Purpose Your Clothes